The Budget and Spending Review set out spending increases in areas ranging from sustainability to levelling up, but it is too early to tell whether these will be enough to address long-standing social and economic challenges.

The current macroeconomic environment feels like an inflection point, as we hover between the pandemic and (potentially) post-pandemic eras. But unusually for inflection points, the current environment is replete with continued economic uncertainty. The course of the pandemic itself remains uncertain, with a recent renewed increase in Covid-19 infections and hospitalisations, and a further rise as much a possibility as a continuation of the gradual ‘return to normal’ that has been in evidence the past several months. Moreover, it remains too early to tell whether some of the economic challenges currently in evidence, such as labour shortages and inflationary pressures, are temporary or will become more permanent features of the economic landscape.

Against this complicated and highly uncertain backdrop, the Budget announced on 27 October was notable for its determination to present plans for “An economy fit for a new age of optimism.[1] After the nearly 10% economic contraction in 2020, real GDP growth is expected to average 6.2% a year this year and next, and thereafter rise by an annual average of 1.7% over 2023-26—a slightly more optimistic forecast than at the last Budget, based on the fact that the economy outperformed expectations in the first nine months of 2021. 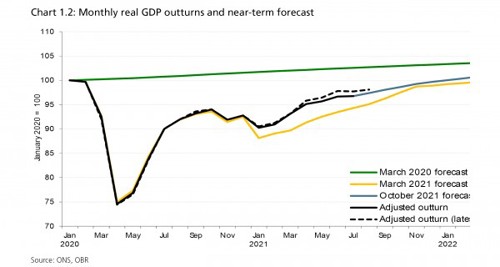 In the March Budget, the Chancellor had announced an increase in the corporate tax rate from 19% to 25% with effect from April 2023, as well as a review of the bank corporation tax surcharge. So for the financial services sector specifically, the big news in the Autumn Budget was undoubtedly the reduction of the bank surcharge from 8% to 3%, also with effect from April 2023—although alongside the planned rise in the corporate tax rate, this means that from 2023 banks subject to the surcharge will still face an overall tax rate that is 1 percentage point higher than it is now.

The planned increase in the profit threshold at which banks are subject to the levy, to £100m from £25m, is, according to the government, intended to benefit consumers by facilitating growth in the banking sector. Indeed, the policy will give small and medium-sized banks as well as challenger banks a competitive advantage.

For the wider financial and related professional services industry, the acknowledgement of the importance of sourcing skilled labour with the announcement of the ‘scale-up visa’ will have come as a relief. Our recent research undertaken with EY reiterated the importance for the industry’s competitiveness of the ability to attract international talent, and so the introduction of the new visa from spring 2022 is welcome.[2]

The importance of a skilled workforce for the industry goes beyond just the talent the industry needs to employ. It is self-evident that an educated and skilled workforce is key to high labour productivity, which is turn is a crucial ingredient in a competitive economy which the UK-based financial and related professional services industry both facilitates and benefits from. Ahead of the 2019 Budget we had called for financial literacy to be prioritised. We cited research by the OECD showing that the UK ranked 10th out of 18 OECD countries on overall financial literacy (comprised of financial knowledge, behaviour and attitudes), with a score noticeably below its European peers. The financial services sector cannot fully engage with customers unless those customers are financially literate, and a pre-requisite for financial literacy is basic numeracy. I had the pleasure of speaking about this point last month at the Autumn Conference of FairLife, a charity promoting fair trading in finance, financial education and social impact (more on this to follow in a future blog post…).

In this context, the new numeracy programme announced in the Budget is a very welcome recognition of the fact that numeracy among the UK public needs bolstering. Funded from the UK Shared Prosperity Fund, the new programme, ‘Multiply’, is also important for acknowledging explicitly that education in numeracy needs to be targeted at adults as well as children; the programme is designed to be accessible by people in work or with other commitments.

The government notes that the enhanced skills higher productivity that will accrue from better numeracy will “will particularly help people in the North East, West Midlands and Yorkshire and the Humber, which currently have the highest proportion of adults [in England] with low numeracy”.[2] This was just one of many instances of the Budget acknowledging the extensive work that is still needed to reduce regional inequality in the UK, and it was encouraging to see the continued to commitment to ‘levelling-up’—for example, through the additional funding for the British Business Bank to establish new regional funds in Scotland and Wales; large grants for the devolved administrations; and investment in digital infrastructure across the UK.

Finally, with COP26 now finally (after a pandemic-induced delay) underway in Glasgow, it is worth noting the Budget’s commitment to the government’s Net Zero Strategy and to ‘Building back greener’ more generally. Our Representation to HM Treasury ahead of the Budget and Spending Review had called for a commitment to long-term support for the transition to electric vehicles. While falling short of our proposals for exemption from Vehicle Excise Duty and separate rates of business-in-kind rates for employees who drive electric vehicles, the Budget did include £620m for EV charging in residential areas and targeted plug-in vehicle grants (further to the nearly £2bn pledged in Spending Review 2020).

Similarly, our Representation had called for structural reform of the housing market to ensure that energy performance is reflected in property prices in order to drive demand for retrofitting improvements and to crowd-in private finance. Instead, the Budget included additional investment in heat pumps; business rate relief and exemptions to support building decarbonisation; and more than £3bn for the Home Upgrade Grant, the Social Housing Decarbonisation Fund, and for decarbonisation of the public sector estate in England.  The overall impression is of a strategy of greening by government subsidy rather than by structural reforms that nudge consumers and markets to prioritise greener products and services. Carbon emissions are the quintessential example of a negative externality, so it is unarguable that government grants will indeed have to play an important role in the transition to net-zero carbon emissions. The balance between such spending and the role of market forces, however, has been left unaddressed by this most recent fiscal statement.

In summary, the prospect of a sustained (and slightly stronger than expected) economic recovery has given the government some room to plan sustained and significant spending increases to try to enhance the UK’s competitiveness by improving its position in areas like tax, human capital, and sustainability. In an ideal world, if all goes well, Covid-19 will recede once again, economic activity will continue to recover, and this fiscal loosening (relative to the pre-pandemic trend) will kick-start a virtuous circle of stronger private-sector consumption and investment that will allow us in the years ahead to look back on autumn 2021 as a true inflection point after which the UK economy and society emerged even stronger in some ways than it would have been in the absence of the pandemic.

A new report from TheCityUK shows that 43% of Britain’s £129.7bn of financial and related professional services exports originated outside London in 2020.

13 October 2022
Exporting from across Britain: Financial and related professional services 2022

UK exports of financial and related professional services are those industry services which originate in the UK and are sold abroad.

Our 2022 National Conference with SFE, kindly sponsored by PwC and supported by State Street, took place on 1 December 2022.