Economic blog: Green finance - as much philosophy as figures

Three weeks ago I had the very great pleasure of launching our latest economic research report on green finance. Following on from our earlier trio of reports offering a green finance primer and covering green bonds and green infrastructure, our latest research is a data-focused, quantitative analysis of green finance globally and in the UK over 2012-21.

Reflecting the strong and growing interest from both investors and policymakers in the area, there is an abundance of published research on green finance. Most of it focuses either on specific aspects of green finance (for example, financing the greening of residential property) or on areas that might be considered part of green finance more widely but are tangential to actual capital-raising (for example, climate-related financial disclosures); or, are partially subjective assessments of green finance markets and/or regulatory structures. Quantitative analysis of green finance has predominantly been undertaken for green bonds—which is unsurprising given that green bonds are bar far the largest component of green finance, as is evident from our report’s summary chart: 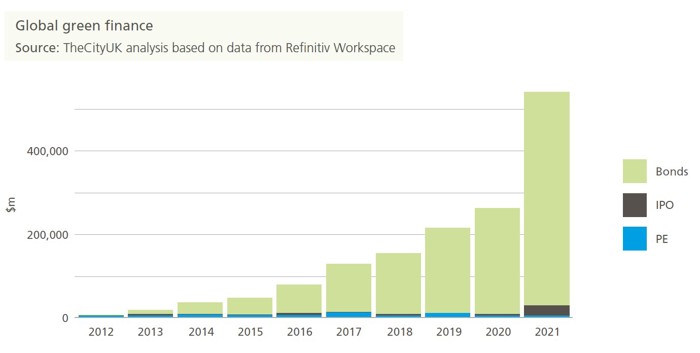 Our new research is a unique attempt to measure and to assess objectively the state of green finance globally and in the UK. In undertaking such analysis, the lack of standardised definitions and classification systems for green finance and green assets was a major challenge. The different standards and definitions in use means that green finance data is not necessarily consistent across sources. In addition, green finance data fails to capture lots of financing activity that could very reasonably be considered ‘green’. For example, small private transactions (like angel investments) are unlikely to be captured on a systematic basis, and so-called ‘transition finance’ may or may not meet a given definition of ‘green’ finance. In short, quantifying green finance is still as much of an art as a science. And as a result, our analysis—which includes green bonds, IPOs, and private equity—should be considered indicative, not comprehensive.

Nevertheless, our contribution to the literature provides an important gauge of both the decade-long trend and the current state of play. We find, for example, that global green finance (using our definition) rose from $5.2bn in 2012 to $540.6bn in 2021. But it remains a minuscule part of the overall financial system, accounting for 1.7% of total finance (on a like-for-like basis) over 2012-21 cumulatively. But that share of green finance in total finance increased from just 0.1% in 2012 to 4.1% in 2021.

Although our analysis includes some international comparisons, we do not attempt to rank countries as green finance centres. Indeed, the comparative work highlighted yet another way in which trying to quantify green finance raises some fairly philosophical questions. We find—unsurprisingly—that in absolute terms the largest markets for green finance were the world’s largest economies: the US and China. These countries’ financial markets are so large that they dominate global finance to an extent that some might find surprising. Together, the US and China account for 48% of the global market for Sovereign, Supranational & Agency bonds[1], and 45% of the global corporate bond market.[2] So, if the US and China have the world’s largest green bond markets, does this merely reflect the size of their bond markets, or does it actually tell us anything meaningful about their green bond markets?

This question prompted us to undertake additional country-specific analysis in relative terms—that is, looking at countries’ green finance markets as a proportion of their overall financial markets. Mathematically, this approach will favour smaller countries with smaller financial markets because the smaller denominators in the calculations will tend to result in higher percentages. For example, considering green equity, Mozambique and Serbia were revealed to have green IPO penetration of 100%--but this is simply because in both cases, the sole public offering in the course of the decade was a green one (from hydropower generator Hidroeléctrica de Cahora Bassa and renewable energy producer Fintel Energija, respectively). In both cases, the companies’ offerings were among the markets’ first-ever IPOs. In countries with such relatively undeveloped equity markets, it is difficult, if not impossible, to draw conclusions about the state of green equity.

But when looking at debt capital markets, which account for the lion’s share of green finance (more than 90% of cumulative green finance flows over 2012-21 were green bond issues), this analysis of penetration is more instructive and raises further interesting questions. For example, Mauritius and Georgia were found to have the highest green bond penetration, with green bonds accounting for around 30% and 20% of total bonds, respectively.

Once again—as can be seen from the ‘Bonds’ column in the table below—these high percentages are attributable to the very small size of the overall bond markets. Nevertheless, we might ask, for example, whether aspects of Mauritius’s long-standing role as an offshore financial centre (particularly for investment in India) are now making the country a notable offshore green financial centre. Green bond proceeds in Mauritius were generated from four issues from three companies out of a mere 20 total issues—and all three firms were Indian companies. 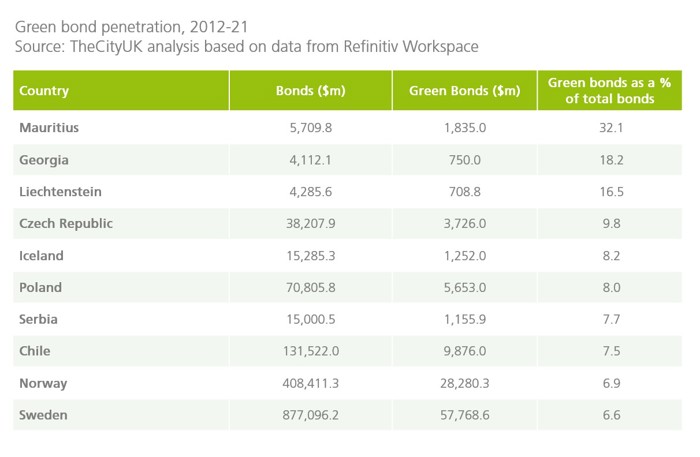 In Georgia, the $500m green bond issue by Georgian Railways was the largest bond issue of the decade (excluding that issue, the average issue size was $224m). Georgia has also taken steps to grow its green finance market: for example, the central bank published a ‘Roadmap for Sustainable Finance’ in 2019, and with the support of the European Bank for Reconstruction and Development, the country has established a Green Economy Financing Facility. In short, it is perhaps overly simplistic to dismiss small countries with high green finance penetration as being mere mathematical outliers. Although such markets are unlikely to become major global players, they may be making important strides in using financial services to green the economy—which, after all, is the essence and the entire point of green finance. 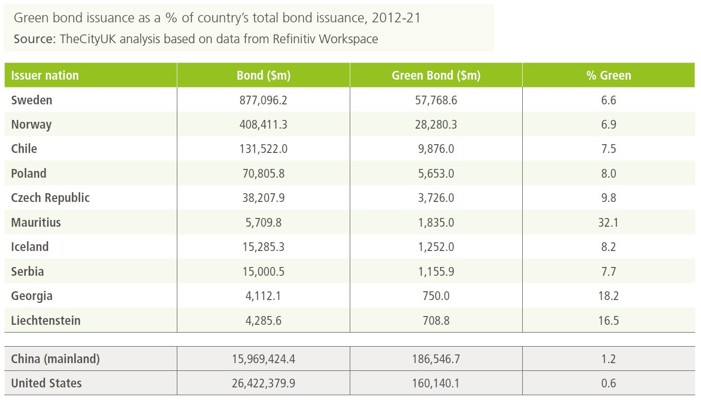 The Nordics’ prominence is perhaps unsurprising given the region’s reputation for focusing on sustainability, and the role of Sweden in particular as a green bond pioneer (the creation of the first-ever green bond in 2007 was prompted by an inquiry from a group of Swedish pension funds, and the world’s first corporate green bond issue, in 2013, was from Vasakronan, a Swedish property company).

Green finance has experienced remarkable growth and development over the past decade, and Covid-19 has made sustainability issues even more prominent than they were previously, as I noted in a speech in the early months of the pandemic. But thorny questions around definitions and metrics, as well as judgements about materiality and additionality, remain, for now as relevant—and in some ways as intractable—as ever.

[1] My calculations based on data from ICMA

LinkedIn
You might also be interested in
Guest blog: Raising the standard: navigating greenwashing on the path to net zero

The ability for financial services firms to distinguish true climate action from greenwashing is a key driver in overall sustainability strategy and ESG risk management.