Last week I was honoured to have the opportunity to speak at TISA’s annual conference on the subject of the economics of women in financial services. My remarks focused on financial inclusion and financial inclusiveness regarding women. With financial inclusion, I referred to access to financial products and services—and in this context, trying to make sure that product and service design doesn’t inadvertently discourage female access.

With financial inclusiveness, I referred to women working in financial services. Office for National Statistics (ONS) data reveal that in the UK overall, both male and female employment has risen fairly steadily since 2000. But in financial services, a gap between male and female employment emerged after the financial crisis and has widened since then. In fact, until 2005 more women than men worked in the industry; since 2006 the industry has employed more men than women, and in 2017 the gap between the two was more than 150,000, as you can see here:

Another way of looking at this is to examine what percentage of jobs in the industry are held by women. The figure has declined slightly but steadily since the crisis, from 49% in 2008 to 43% in 2017.

Industry unemployment rates give a more nuanced picture. This picture is also clouded by the fact that the ONS category for this indicator includes both finance and real estate, and there is no easy way to disaggregate them. In the 40 quarters since April-June 2008, the unemployment rate in finance and insurance has been higher than the rate for men exactly half the time. 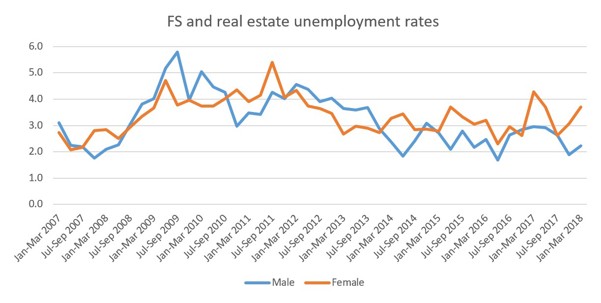 But the incidence of higher female unemployment is concentrated in 2011, plus 2014 through Q1 2018. And in that recent period, the gap has been relatively high, at 0.7 percentage points on average. For example, in Q1 2018 the male unemployment rate in finance and real estate was 2.2%, compared to the female rate of 3.7%.

So what conclusions can we draw from these data? My own assessment is that in terms of overall gender balance, the financial services industry performs reasonably well—in fact probably better than many people would expect. The male/female industry employment split is still nearly 50/50, despite the recent decline in the proportion of industry employment accounted for by women. A number of other industries, in contrast, are very heavily skewed one way (nearly 80% female employment in health and social work, and education) or the other (around 80% male employment in manufacturing and construction).

Nevertheless, there are reasons to give pause for thought. One is the often-discussed lack of female representation at the more senior levels of the financial services industry. The gender balance in industry employment overall diminishes markedly with seniority, as numerous studies have shown, and the reasons for this are likely to be a combination of industry-specific factors and whole-economy factors.

Another is the fact that the data tell us nothing about why the male/female employment gap exists. There are a number of plausible explanations, ranging from the complex (differing economic and social incentives, and the influence of self-selection) to the blunt (discrimination); more work should be done to try to identify whether lower female industry employment/higher female unemployment rates have arisen for benign or more pernicious reasons.

Finally, we should pay attention to the trend. The financial services industry as well as the broader economy are still grappling with the effects of the 2008-09 crisis. In addition, the industry and economy are contending with potentially fundamental structural shifts, such as the impact of technology on employment. (Of course, these are not mutually exclusive, as in many cases crisis effects reinforced technological trends that were already underway.) Our analysis shows that financial-services employment has declined overall in recent years, to 1.07m in 2016 from 1.08m in 2009. The current male-female industry employment gap, at less than 1% of total industry employment, is noteworthy but hardly grave. But a further widening of that gap could potentially become cause for more concern—reinforcing the need to better understand the drivers of falling financial inclusion of women in the financial services workforce.

Our annual 'Key facts about UK-based financial and related professional services' report looks at the contribution of the industry to the UK economy.