New data allow us to build on earlier analysis to examine financial services productivity on a regional basis.

Our recent economic research, ‘Key Facts about UK-based financial and related professional services’, is probably familiar to readers of this blog as being our annual research quantifying the contribution of the industry to the UK economy. As well as highlighting the industry’s role in providing savings, insurance, business lending and other services, this year’s report included data showing that financial services productivity is the second-highest of all UK industries: 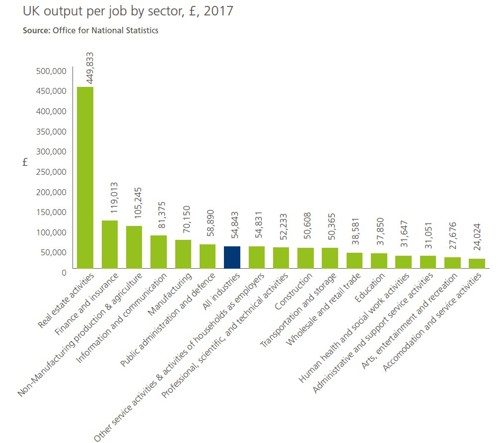 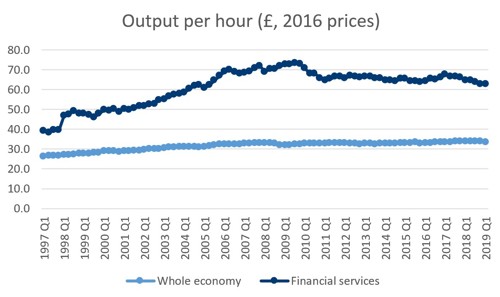 The availability of time-series data also allows us to compare regional financial services productivity before the 2008-09 financial crisis and afterwards. The data show that overall, the pre-crisis and post-crisis periods were quite similar in that the majority of UK regions experienced industry productivity growth rates below—but not very far below—the UK average, as seen in the table below). 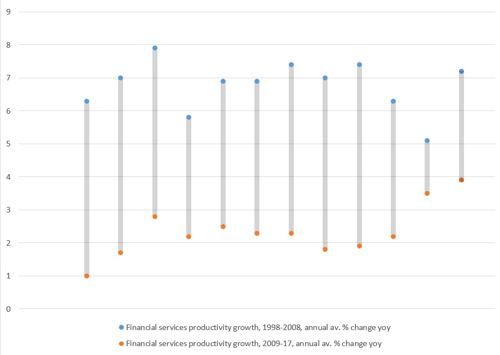 I’ve chosen not to identify the individual regions to focus on the overall pattern rather than the performance of particular regions. The positions of the dots show how much variation there is in regions’ and nations’ financial services productivity growth – and also that the overall decline of recent years  has not led to a convergence in growth rates.  Meanwhile, the distance each between dot pair, represented by the grey lines, shows that some regions have experienced much bigger pre- and post-crisis gaps than other have.