Economic blog: How much is the UK’s role as a financial services exporter changing?

One of the key metrics used to examine that role is the financial services trade surplus. Using data in US dollars from UNCTAD, which allows international comparisons, we found that the UK still has the world’s largest trade surplus in financial services, totalling $80.6bn in 2020. This represented a 7.9% increase from $74.7bn in 2019; sector exports rose by 4% year on year, while sector imports declined by 6.8%.

This surplus is important in macroeconomic terms because the wider services surplus helps to offset the deficit in goods trade, providing support to the overall balance-of-payments position. In 2020, trade patterns were of course severely disrupted: the UK ran a (small) trade surplus (£4.3m) for the first time since 1997 (for comparison, the trade deficit averaged £26.3bn a year over 2010-19). This surplus was generated because although total (goods and services) exports declined by 14% year on year (to £600bn), total imports declined by 17% (to £597bn) as Covid-19 ravaged demand. Only 12 sectors generated trade surpluses in 2020, eight of which were services sectors. Of this, the surplus generated by financial services was the largest, at £63.7bn.

Because the UK’s financial services exports so vastly outweigh its imports, it’s also worth taking a look at these exports in a bit more detail—for example, analysing where they go. Sector exports are in fact highly concentrated, with the US and EU accounting for fully two-thirds of total sector exports. 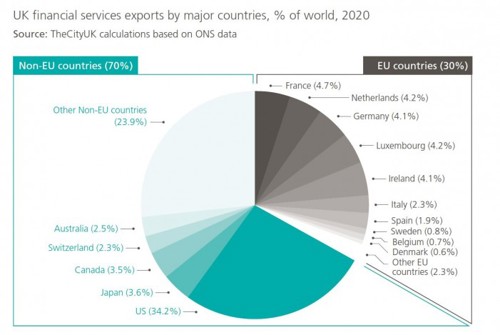 It may be tempting to interpret these figures as a consequence of Brexit (although the post-Brexit transition period was in place throughout 2020, it could be reasonable to assume that knowledge of the impending changes might have affected trade patterns in 2020). However, the picture is in fact much more nuanced. Firstly, the decline in UK financial services exports to the EU was far from uniform; indeed, it was driven in very large part by a 34% decline in sector exports to the Netherlands, to £3.5bn. FS exports to France, Ireland and Luxembourg decreased marginally (by 2%, 3% and 4%, respectively). Meanwhile, sector exports to other major EU markets like Germany, Italy and Spain actually increased (by 1.6%, 8.9% and 22%, respectively). This indicates that in 2020 country-specific factors—including, but not limited to, the impact of Covid-19 on demand—are likely to have had more influence on trade patterns than blanket Brexit factors.

Secondly, it is always dangerous to read too much into a single year’s data. Looking back slightly further, UK financial services exports to the US had declined marginally (by 0.4%) year on year in 2019, but had risen by 10.9% in 2018 (and by 0.6% in 2017). In other words, trade flows had exhibited volatility even before the UK’s exit from the EU only became official in 2020. It is therefore likely that sector exports to the US are influenced by a wider set of factors than a shift in directional trade patterns brought about by EU exit. The ONS data go back only to 2016; a longer time series would allow us to draw firmer conclusions.

A new report from TheCityUK, in partnership with DDCAP, underlines the UK’s status as the leading Western centre for Islamic finance...

This report evaluates the Islamic finance sector globally but with a special focus on the UK market in recent years, presenting the regulatory landscape, the performance of each major segment, and the most innovative developments.

Following the success of our inaugral International Conference in 2022, we will be holding the event again in London in April 2023. 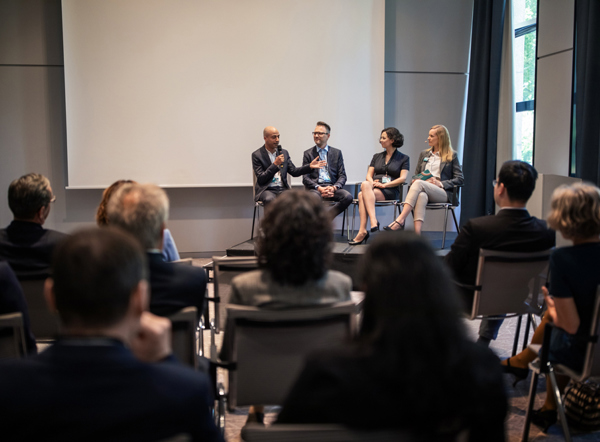