In my last blog post I explored some analysis the Office for National Statistics (ONS) has undertaken on productivity in the UK regions and nations. But the data I explored last week was for the whole economy; today I want to take a closer look at productivity in financial services.

This recent article in the FT talked about a ‘productivity crisis’ in the UK and asserted that “between 1999 and 2007, Britain’s productivity growth was heavily concentrated in industries such as computing, finance and professional services. But the performance of these sectors dropped sharply after 2008.”

Our own analysis confirms this for financial services. Since reaching peak output per hour (at 2016 prices) of £73.6 in Q3 2009, labour productivity in financial services declined on a quarter-on-quarter basis for six consecutive quarters, and has remained more or less flat since then. 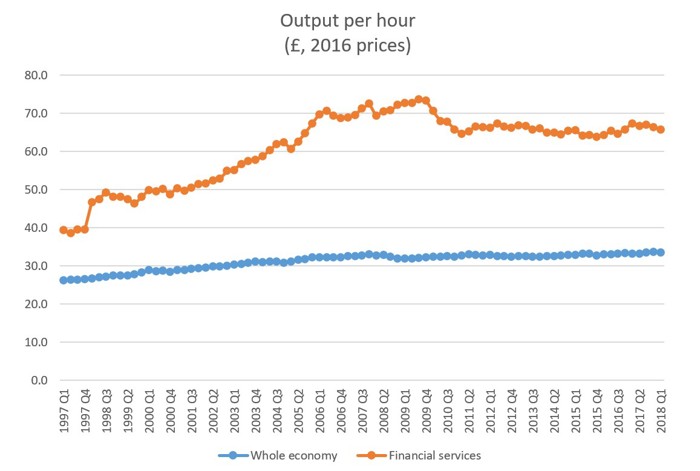 Some observers may find it surprising that some of the sharpest declines in productivity post-crisis were in sectors that had performed best on this measure pre-crisis. The question remains, however, whether the immediate pre-crisis period represented a norm towards which industries should now be aiming; or whether it was in fact an anomalous period of unusually rapid productivity growth in certain sectors.

The FT references this paper published by the Economic Statistics Centre of Excellence (ESCoe). Even more interesting than the point that “labour productivity growth tends to have lost most momentum in those industries that experienced strong growth before the crisis” is the analysis splitting productivity growth into its constituent parts. These are capital deepening, which measures the change in capital input relative to the change in labour input; labour composition, which relates to the skills of the workforce; and total factor productivity (TFP). TFP captures the part of productivity that is not explained by the other factors. This deceptively simple concept has an ocean of literature devoted to it, though. Often reduced to a shorthand for technological improvements, TFP is in fact a much broader concept and one that continues to resist a comprehensive, definitive explanation.

ESCoE’s analysis shows that the recent decline in productivity growth in financial services has been almost entirely because of a decline in TFP. Compared to the recent decline, TFP saw correspondingly large increases between 2002 and 2007. But in the three years before 2002, both the rate of productivity growth and the composition of that growth was completely different.[1]

In the 1999-2001 period, half of industry productivity growth was accounted for by capital deepening. In 2002-07, in contrast, industry productivity growth was much faster and almost all the growth came from TFP. Since 2008, the contribution of TFP has been negative, and this has been partially offset by—smaller—positive contributions from capital deepening and labour input.

The decline in financial services productivity has outpaced that of the economy at large over the past year. But in spite of that, industry productivity remains twice as high as whole-economy productivity. This is evident from the first chart in this post, but the relationship is made explicit. 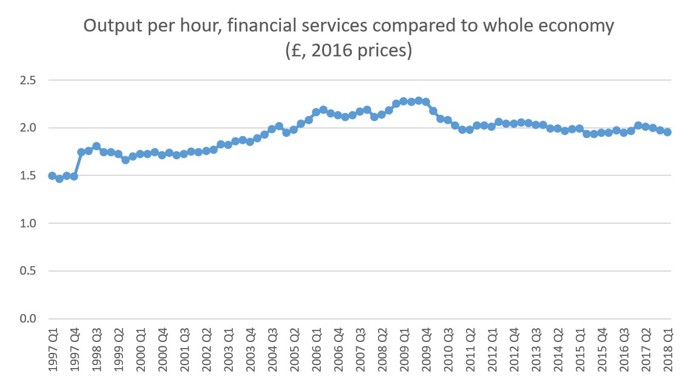