Amid the fanfare that greeted the bullish economic projections published last week in the Bank of England’s Monetary Policy Report, one detail of monetary policy received relatively little attention. The Bank maintained its policy stance, keeping the Bank Rate as well as the level of both corporate and government bond purchases unchanged. But in a technical note[1] following on the from the 5th May Monetary Policy Committee meeting, the Bank noted that it will reduce the rate of asset purchases under its Quantitative Easing (QE) programme. Specifically, in the coming weeks it will purchase £1.1bn in each of the three gilt maturities per week, down from £1.5bn in each of the three maturities per week previously.

I’ve recently done some detailed thinking about the Asset Purchase Facility, because last month I had the pleasure of giving oral evidence to the House of Lords Economic Affairs Committee as part of the Committee’s inquiry into QE. One of the questions posed during the session was whether central banks find themselves in a position where exit from QE is now, in fact, impossible. I observed that QE was introduced in 2009 as part of a wider approach called ‘unconventional monetary policy’; it is noteworthy that something that was launched as a temporary measure is still in place more than a decade later, and, given that length of time, has arguably become a sort of ‘new normal’. It is also worth highlighting that it was introduced, in the first instance, as a response to the financial crisis, but maintained and subsequently expanded in response to other economic shocks: the prospect of Brexit in 2016, and the pandemic last year. Does this expansion represent the normalisation of QE, making it perhaps ‘conventional’?

It would be easy to argue that it has. QE in the UK has expanded not only in scope, but in volume. The chart below shows the commitments the Bank of England has made each year to total bond purchases (gilts and corporate bonds) under the programme: 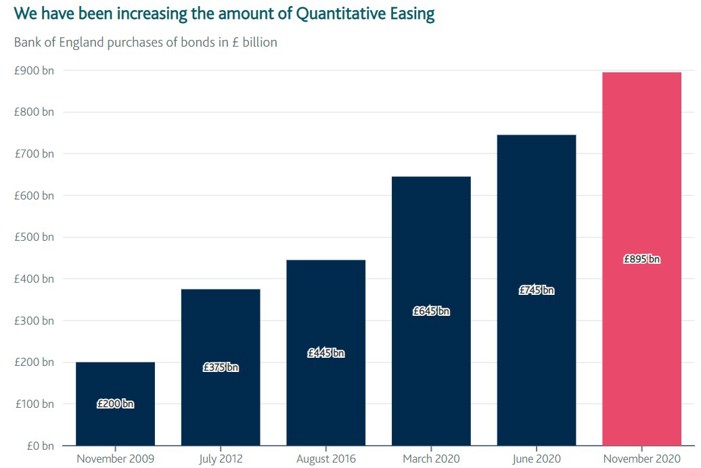 While once the debate about QE exit was around an actual unwinding of asset purchases, the stock of purchases is now so large that in practical terms QE exit will have to focus first and foremost on reducing the flow of asset purchases before consideration can be given to reducing the stock of assets held. Indeed, the Fed in the US is the only central bank that has attempted to sell any of its bond holdings acquired under QE. As Tamim Bayoumi, a former Deputy Director at the IMF, has observed, “There is a risk that [QE] becomes never-ending, with periods of gradual reduction being interrupted by buying sprees”.[2]

A point emphasised in the Economic Affairs Committee evidence session was that one of the biggest risks around unwinding QE would be unwinding in a disorderly or uncontrolled fashion. For this reason, the continued credibility of central banks is paramount; as long as central banks maintain market confidence by ensuring that monetary policy remains predictable and attuned to market sentiment, then the risk of (for example) bursting asset bubbles as (if!) QE is unwound is minimised (though not eliminated). And one of the key ways in which central banks demonstrate their sensitivity to market sentiment is through clear signalling.

In this context, it is perhaps instructive to view last week’s announcement from the Bank of England as a signalling mechanism. Had the rate of bond purchases remained at the prior level, total asset purchases would have exceeded the £875bn target before end-2021—perhaps fuelling speculation that yet another expansion of the Asset Purchase Facility was on the cards. So although far less prominent than last week’s revised GDP forecasts, the change is noteworthy, even if the Bank was at pains to point out that it “should not be interpreted as a change in the stance of monetary policy”[3] (because the overall target stock of assets to be bought was unchanged). It can be considered an implicit commitment to the continued maintenance of both the overall target (ie, no further QE expansion) and its timing (ie, no sudden stop sooner than planned), and a signal that the reduction of the pace of asset purchases in order to hit both the target and the timing will be phased and gradual rather than sharp and sudden. In other words, in the brave not-so-new world of ‘unconventional’ monetary policy, a demonstration of precisely the kind of positioning that should ultimately help support macroeconomic stability by mitigating against the risk of policy-induced financial instability.