In my last blog post I examined recent data on UK regional economic specialisation. In this post I’m going to continue to address the regional theme, this time by exploring international comparisons of regional productivity and employment.

In recent years there has been an abundance of speeches, articles and papers dissecting the UK’s so-called “productivity puzzle” and potential solutions. By now, the tale of stagnant post-crisis productivity growth is a familiar one. According to the latest data from the ONS, labour productivity decreased by 0.4% quarter-on-quarter in Q1 2018. Although it rose by 0.9% on a year-on-year basis, that growth rate remained much slower than the average growth rate of 2% seen before 2008, as illustrated by this chart we created from the ONS data: 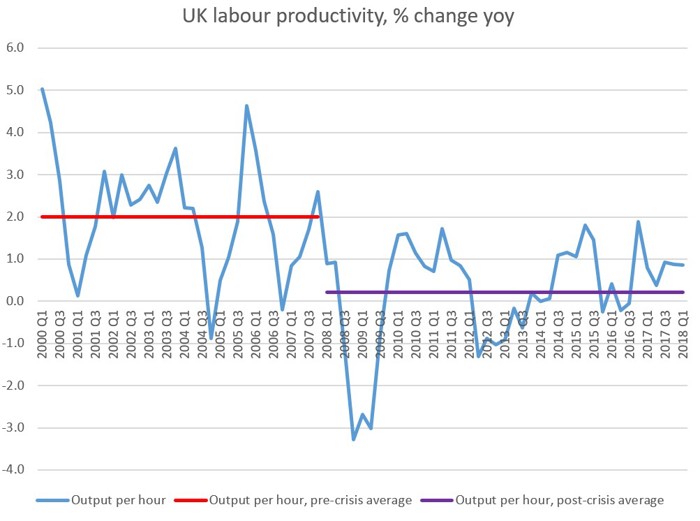 Source: TheCityUK calculations based on Office for National Statistics data.

Although other G7 countries have exhibited the same poor productivity trend, the UK’s performance has been noticeably worse than its peers: 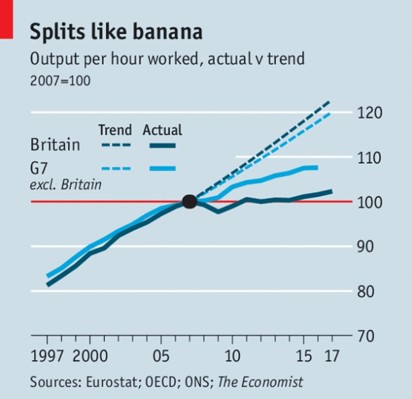 But do these national aggregates mask sub-national variations? The chart below, from the Office for National Statistics (ONS), shows that they do. Unlike the line graph above, which shows the growth rate of UK productivity over time, the chart below shows levels of productivity in a number of sub-regions in six European countries, benchmarked to the average level of UK productivity. The average UK level is represented here by the vertical line, and the distribution of the sub-regions, each represented by a dot, shows that a number of UK regions are clustered towards the left-hand side of the chart, 15-20% below the UK average productivity level. This is likely to help explain why the aggregate UK productivity performance looks worse than that of many peers.

The ONS’s regional-level international comparisons of productivity show that the Paris and London regions have the highest productivity of all the regions in the six countries analysed. German regions dominate among the upper part of this productivity league table. By contrast, “Aside from London, the only UK region amongst the top half of regions [in the six countries]…is the South East (ranked 17 of the 52 regions) [and] UK regions dominate amongst those with the lowest productivity levels, alongside sub-regions of eastern Germany and southern Italy”, according to the ONS.

Measuring productivity is an inexact science (some might argue it’s more of an art than a science!) and there are different methods and metrics. The ONS has defined productivity as output per worker. Interestingly, additional analysis on employment rates across countries reveals the possibility that in the UK, low productivity and high employment might be two sides of the same coin.

So whereas many UK regions have low average productivity compared to other European regions, they have relatively high employment rates compared to other European regions. In and of themselves, these datasets are not enough to suggest that the UK has experienced, in effect, a trade-off between employment rates and productivity growth. But it is striking that in contrast to the UK, regions in France, which are generally clustered towards of the top of the productivity charts, “congregate at the lower end” of the distribution in terms of employment—hinting at the possibility of an economic structure that encourages productivity over employment. The possibility of this trade off occurs because productivity gains are often driven by investment in capital, and under certain conditions, labour and capital and substitutable.

These comparisons are very timely: one of the recommendations in our recently-published report analysing financial and related professional services in the UK regions and nations was that “government should facilitate closer links between regional clusters in different countries”. Our recommendation referred to knowledge-sharing in financial and related professional services specifically, but there’s a strong argument to be made that studying the success of relatively high-productivity regions might yield lessons for improving things in relatively low-productivity regions. Of course, since economic performance generally depends on a combination of local policy, historical and even cultural factors, it’s unlikely that successful strategies can simply be transplanted wholesale from one country to another. But the greater perspective that comparative knowledge brings can surely be combined with knowledge of local factors to bring about incremental improvements in economic policymaking, and therefore economic performance.

A new report from TheCityUK shows that 43% of Britain’s £129.7bn of financial and related professional services exports originated outside London in 2020.

13 October 2022
Exporting from across Britain: Financial and related professional services 2022

UK exports of financial and related professional services are those industry services which originate in the UK and are sold abroad.