Trade asymmetries: another look at balances that don’t balance

The latest trade data released by the ONS on Monday reinforced a point often made by TheCityUK—for example, in our latest ‘Key Facts’ report. The surplus in services trade—driven in large part by the surplus generated by financial and related professional services—helps mitigate the deficit in merchandise trade. In the first four months of 2018, according to the latest ONS data, the balance on goods trade was £-5.5bn, while the balance on service trade was £4.3bn, leading to a total trade balance of £-1.1bn.

Our economic research has emphasised this point by noting that the UK has the world’s largest trade surplus in financial services. The EU accounts for almost 40% of this surplus, and within that segment, France, Germany and the Netherlands feature most prominently. Overall, the US is the biggest single contributor to the UK’s financial services trade surplus. 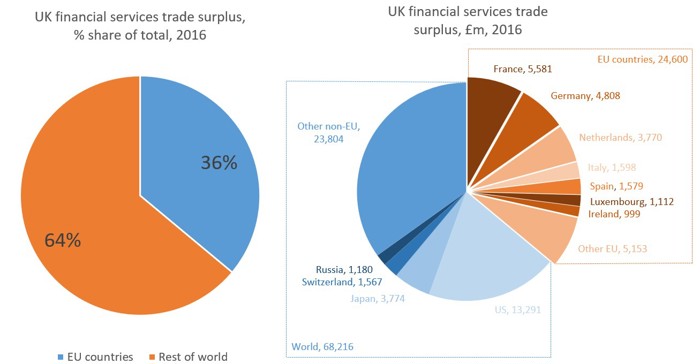 Looking at exports rather than the trade balance, the picture is almost identical. The US is the single largest destination for financial services exports (£17bn in 2016). The most striking feature of the industry’s exports is how geographically concentrated they are: the top five destinations (the US, France, Germany, the Netherlands and Japan) together account for around 50% of total industry exports.

Since current events have propelled trade data into the headlines, it’s worth revisiting an issue that affects these snapshots of bilateral trade. It’s one that I’ve written about in a previous post: balance-of-payments asymmetries. In my earlier post I wrote about how such asymmetries tend to be larger in services trade than in goods trade. I also used the example of the US-UK asymmetry, where both countries report a trade surplus with each other—clearly an impossibility!

More recent research by the ONS takes a closer look at the UK-US asymmetry and finds not only that this pairing’s asymmetry was particularly large but also that within services, financial services plays a major role in the discrepancy.

Over 2014-16 the average total asymmetry in services trade between the US and the UK was £32.5bn. And finance, insurance and pensions accounted for more than 40% of the total asymmetry, according to our calculations.

The ONS cautions that since the analysis is ongoing, it is too early to draw overall conclusions. However, one issue that has identified as a partial explanation is the fact that the US Bureau of Economic Analysis (BEA) includes the Isle of Man, Jersey and Guernsey as part of the UK, but the ONS does not. Given the important role financial services plays in the economies of these three territories (and especially the latter two), it is reasonable to assume that this geographical distinction goes a long way to explaining the UK-US asymmetry in financial services trade.

My earlier post on this topic highlighted the need for greater levels of international collaboration and sharing of information to address statistical issues like these. The co-operation between the ONS and the BEA is an excellent example of this sort of information sharing, and the fact that the ONS is undertaking ongoing analysis of this little-understood issue—including expanding its deep-dive analysis to other countries—is most welcome. The asymmetry issue underscores the importance of thinking critically about headline statistics and the way these can be deployed. In this context, anything that helps solve what at first glance appears to be a statistical puzzle enhances the way these statistics are used not just by economists, but by all those hoping to gain an understanding of global trade in the 21st century.