I recently wrote in this blog about the UK’s trade in financial and related professional services. Last week I had the opportunity to expand on some of these themes while giving oral evidence to the House of Commons International Trade Committee.

My fellow witnesses and I talked about the extent of the UK’s competitiveness in services trade. Overall, UK exports of services accounted for 6.6% of global services exports in 2017, according to our calculations using data from the UN Conference on Trade and Development (UNCTAD). Although this represents a slight decline from 7.6% in 2008, this reflects faster growth in services exports elsewhere rather than an absolute decline in UK exports. In 2017, the UK exported £277bn worth of services—of which financial services exports (including those of the insurance sector) accounted for nearly one-third. 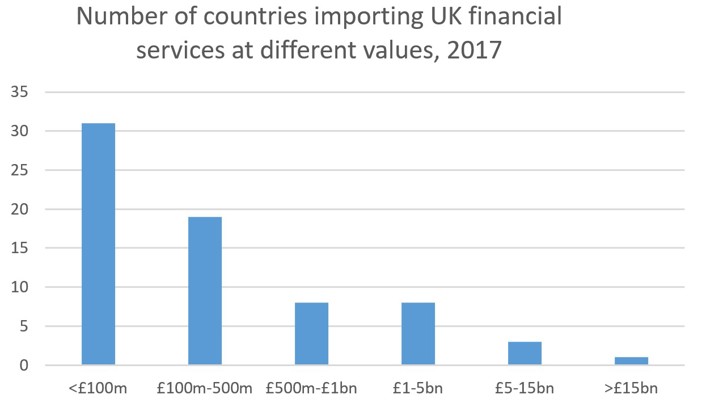 These data are all for 2017, but another notable aspect of the data is that the trend has been consistent in recent years: the top five destination countries have represented around half of industry exports since 2012 (which is as far back as the data go).

Looking forward, these trends are likely to continue in the short- to medium-term. The data reinforce the general point that services trade is, broadly speaking, conducted among advanced economies. According to UNCTAD, “In 2017 developing economies exported services worth US$1.6 trillion, while exports from developed economies were valued at US$3.6 trillion, and those from transition economies US$122 billion”.[1] There are a number of reasons for this, including the countries’ differing economic structures and the implications for the nature of demand generally and import demand specifically in different nations.

A third point is the question of the extent to which a developing country’s burgeoning demand for financial services would be met by imports versus by an expansion of the domestic sector. Looking again at China, the country has a large financial sector—and in particular, a large banking sector. According to data from the People’s Bank of China (the Chinese central bank), the amount of funds in Chinese financial institutions is $30trn, up from $8trn a decade ago. Because of the extent to which the banking sector dominates the Chinese financial system, the value of funds in ‘deposit institutions’—essentially banks—is similar to the amount of funds in the system overall. This compares to banking-sector assets of $17trn in the US and $10.5trn in the UK. Although demand for financial services in China may grow rapidly, much of this is likely to be met by domestic institutions.

Of course, China’s economy is unique in many ways, so what is true for that country is unlikely to be true across the universe of emerging and developing economies. This, then is a reminder that differentiation in emerging-market analysis remains critical—a point I have made previously, in this post highlighting one of our economic research reports.