Not all services “trade” is counted as trade. How should we think about this?

A few months ago I wrote a blog post explaining that the World Trade Organization (WTO) has a broader definition of services trade than the balance-of-payments frameworks of national statistical agencies (including the UK’s Office for National Statistics [ONS]). The upshot is that not all services “trade” as described by the WTO is included in a country’s “trade” data, as captured in the balance-of-payments framework.

The discrepancy arises from services trade ‘by commercial presence’ i.e. by Mode 3, in the “Modes” language of the WTO General Agreement on Trade in Services (GATS). It occurs when a service provider in Country X supplies its services in Country Y by establishing a commercial presence—for example, a local subsidiary—in Country Y. The diagram below provides a particularly clear illustration of the different services trade Modes: 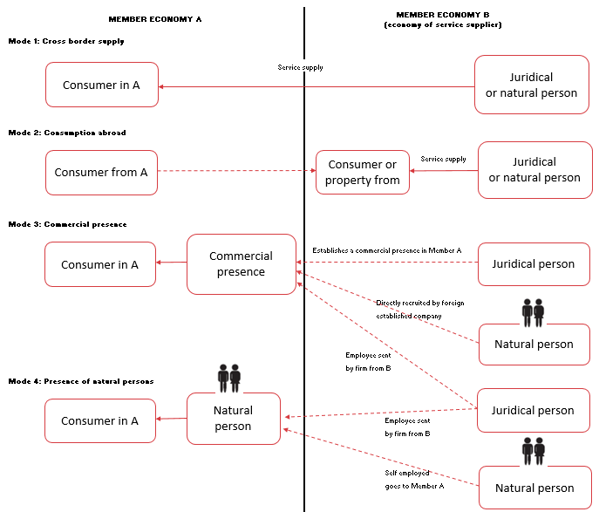 New data published by the ONS now allows us to analyse the UK’s financial services trade by Mode. The data show that of the £81bn of financial services exports recorded in 2018, almost all of it (88%) was classified as Mode 1. A small amount (12% of the total) was classified as Mode 4. This is an intuitive result given that lower cost and relative ease of Mode 1, supplying services remotely (for example, someone in another country buying an insurance policy from a UK-based insurer) compared with Mode 4, presence of natural persons (for example, someone in another country buying an insurance policy from an employee of a UK-based insurer who has gone on a business trip to the other country to sell policies). The data are also disaggregated by broad geographical area. Interestingly, the split of industry exports going to the EU vs the rest of the world (roughly 40%/60%) is the same for both Modes. (Mode 2, which is consumption of services while abroad, tends to be mostly travel/tourism; ONS data show no financial services exports via Mode 2.)

Mode 3 trade is not included in the balance-of-payments statistics because the balance-of-payments framework is based on the concept of economic residence, measuring “the economic transactions between UK residents and the rest of the world”.[1] This crucial concept explains why “trade”, as measured by a country’s trade statistics, doesn’t include “trade by commercial presence”, or Mode 3 “trade”, as described by the WTO, and instead includes only the WTO’s Modes 1, 2 and 4. Once a UK-based supplier establishes a presence in a foreign country to sell its services in that country, the foreign branch or subsidiary is no longer a UK resident for the purposes of measuring economic transactions.

Does the discrepancy matter? Imagine adding £Xbn of UK financial services exports by Mode 3 to the £81bn in recorded financial services exports. You might think that this expanded figure for industry exports would give a more complete picture of how UK-based financial services were supplied to overseas clients and customers. This unknown figure—£Xbn—is likely to be sizeable, especially in the case of major financial services centres such as the UK. Analysis of EU services trade by mode undertaken by Eurostat notes that “When comparing the EU’s total exports of services (all four modes) to the exports performed through three modes (modes 1, 2 and 4…), the amount increases nearly threefold—from EUR 863 billion (sum of modes 1, 2 and 4) to EUR 2,315 billion (also including exports via foreign affiliates). In other words, about 63% of the EU28’s total services are supplied via mode 3”.[2] Moreover, Eurostat’s analysis shows that financial services are a prominent contributor to EU Mode 3 services trade.

But although adding up exports across all 4 modes of trade in this way is fine as a conceptual exercise, the specific figures would be misleading. As I explained in the previous blog post on this topic, some of the revenue generated by a Mode 3 foreign affiliate would be included in the balance-of-payments framework as income—to the extent that it was repatriated back to the country of origin. This shows that we are presented with two challenges. First, we would need to be able to track individual firm decisions—whether or not revenue generated by a local commercial presence in Country Y is repatriated to the parent entity in home country X—when trying to estimate the true economic picture in relation to this broader concept of services exports. Second, this repatriated revenue would have to be excluded from the estimation of “expanded” exports, to avoid double-counting (since it would already be recorded as an income credit rather than a trade credit).

Where does this leave the reader hoping for a more nuanced understanding of services exports? The lesson may in fact be that the descriptive focus on “trade” and “exports” is quite misleading. Firstly, services trade is more difficult to conceptualise and to measure than goods trade, and these constraints contribute to the disproportionate attention that policymakers, the media, and other non-specialists give to merchandise trade (and indeed the industrial economy more broadly, though that wider point is beyond the scope of this post).

Secondly, when services trade is discussed, the familiar export-import framework—selling things overseas and buying them from overseas—is (understandably) the one that is used. But for many services—particularly highly-regulated ones such as financial services—much overseas business is transacted through overseas branches or subsidiaries. A broader focus on the overall balance of payments (including income and foreign direct investment) would therefore provide a more accurate picture. And by continuing to focus in isolation on the trade component of the current account, the media and policymakers are representing and/or considering only a part—not the whole—of the story that is international “trade”.

[1] Office for National Statistics, ‘An introduction to the United Kingdom balance of payments’